Avon Chairman and CEO Andrea Jung and Avon global spokeswoman Reese Witherspoon celebrated the company’s 125th Anniversary year in Warsaw, Poland, on June 14 and Moscow, Russia, on June 16. These cities are the ninth and tenth stops of the 16-city Avon Believe World Tour meant to serve as a morale-booster for the company’s thousands of representatives in each country.

At each event Jung and Witherspoon presented a grant of $60,000 to a local organization to continue its work to support victims of domestic violence. In Warsaw, the grant was made to Blue Line. In Moscow the grant went to ANNA, the National Center for the Prevention of Violence in Russia.

“We are proud to be able to provide these important grants to organizations around the world that make it their mission to help women,” said Jung. “As the company for women, Avon feels an obligation to play a leadership role in helping to improve the lives of women around the world, and we truly believe we can make a difference.”

Chinese American Andrea Jung has been Avon’s CEO and chairman since 1999. She joined Avon in 1994 to head up its product marketing group.

In 1993 Jung married Michael Gould, CEO of Bloomingdale’s where Jung had her first job. Gould is CEO of Bloomingdale’s, the first company Jung worked for after college. They separated in 1999 and later divorced. Jung has a 14-year-old son adopted while she was married to Gould and a 22-year-old daughter from her first marriage.

Avon is a global beauty company with over $10 billion in annual revenue. It is the world’s largest direct seller, with 6.5 million representatives doing door-to-door sales in over 100 countries. Avon’s product line includes beauty products, as well as fashion and home products. 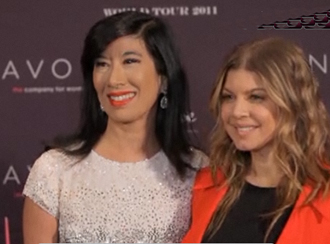 Andrea Jung and Black-Eyed Peas singer Fergie appear together to kick off Jung's world tour to celebrate Avon's 125th anniversary at the beginning of June, 2011.