A gargantuan 10-billion-yuan ($1.58 bil.) digital film park called Chinawood will open at the end of May in the commercial and technological hub of Wuxi. The park’s opening has been touted as ushering in a new golden age of filmmaking in China.

The Wuxi (National) Digital Film Industrial Park, which occupies about 6 square kilometers (2.34 sq-miles) has been compared to Hollywood or India’s Bollywood for the role it’s expected to play in China’s film industry. Film production is reportedly set to begin in a core 500-acre area of the park. Every major Chinese film studio as well as several leading American and European film companies have opened or are expected to locate operations in the park.

Chinawood aims to become a global digital film capital within the next three to five years and attract over 500 film-related businesses employing 30,000-50,000 workers. At that point the annual value of the park’s film-related production output is projected to exceed 20 billion yuan ($3.15 billion).

Wuxi — a city with a population of 6.4 million — is generally considered one of China’s three or four leading business cities. It is sometimes called “Little Shanghai” because of its proximity to China’s commercial hub. Since 2006 major software and animation studios have been locating in the city’s Binhu district which is renowned for its lovely scenery. In 2009 alone 17 films and over 120 TV episodes and documentaries were filmed or produced there.

Wuxi has traditionally been a center of China’s textile industry. The government’s push to upgrade the coastal region to higher value-added industries has made Wuxi a hub of both green technology and electric motor industries in recent years. It is home to two of China’s leading photovoltaic producers.

China’s box office posted 13.1 billion yuan ($2.06 billion) in 2011, a big jump from just below 1 billion yuan ($158 million) a decade ago. If the industry continues to grow at the rate of 35% as in the past two years, China will be outgrossing the US in box office within five or six years, possibly justifying the optimistic expectation of a new golden age of filmmaking which is expected to last 10-to-15-years.

“Hollywood’s always looking for another place to accommodate its productions and save costs, from nice hotels to nice sound stages and new and different locations,” said Hollywood executive Sid Ganis of Chinawood’s potential to attract US film industry giants. He sees the Wuxi film park as becoming more than a “mirror” of Los Angeles “because it’s meant to be all disciplines in one location.”

Hollywood’s Raleigh Studios, a 90-year-old independent studio, has already located its operations in Wuxi, citing the location’s combination of vision and strong interpersonal relationships. Others among the hundreds of firms already committed to doing business in Chinawood include the UK’s E3D Studios, which participated in five Harry Potter films and three James Bond films, and several Chinese post-production companies that have worked on Avatar, Titanic, Mission Impossible: Ghost Protocol, X-Men and Underworld: Awakening, among other major Hollywood projects.

But Wuxi’s prospects for becoming a global film center doesn’t look so rosy to some. China’s film industry has entered a bubble, believes Wang Zhongjun, chairman of Chinese film producer and record label Huayi Brothers. His pessimism is based on the relatively small proportion of Chinese films that become profitable. Over 500 films were produced in 2011 but only about 160-170 made it into theaters, with only about 20% making a profit and another 10% breaking even, Wang points out. But that ratio is roughly the same one on which Hollywood has been thriving during the past century. 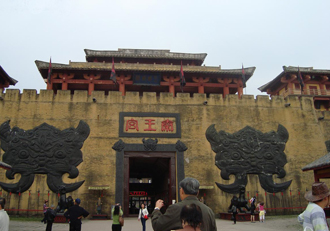 Chinawood is an expansion of Hengdian — a location set for Chinese costume epics and a tourist attraction — to include modern digital film production facilities.