Dan Dongeun Huh has developed a bionic device that facilitates research by mimicking conditions in a distressed living human lung.

Huh, a research fellow at Harvard’s Wyss Institute for Biologically Inspired Engineering, led a team that created a device using human lung and blood vessel cells that behaves remarkably like a functioning lung inside the human body.

“We were inspired by how breathing works in the human lung through the creation of a vacuum that is created when our chest expands, which sucks air into the lung and causes the air sac walls to stretch,” said Huh. “Our use of a vacuum to mimic this in our microengineered system was based on design principles from nature.”

The device, about the size of a rubber eraser, is a clear, flexible block of polymer perforated by two tiny channels separated by a thin membrane. One channel, through which air flows, is lined with human lung cells. The other channel, lined with blood-vessel cells, is filled with a nutrient-rich liquid that acts as a blood substitute. A vacuum is applied to the channels to re-create the way human lung tissue physically expands and contracts during breathing.

The most remarkable aspect of the so-called “lung-on-a-chip” is that it actually provided unanticipated insights by replicating distressed conditions that would be impossible to create in a living human subject and difficult to replicate in animal subjects.

Huh’s study sought to use the lung chip to replicate the conditions of pulmonary edema in which the lungs fill with fluid and blood clots. The condition can be caused either by heart failure or by the side effects of a common cancer drug. The researchers injected the cancer drug into the chip’s blood-vessel channel and found that fluid and blood plasma proteins leaked across the membrane into the air channel — just as they would in patients experiencing the drug’s side effects.

The study produced two surprise discoveries. First, the leakage as not caused by the immune system — which wasn’t represented in the study — as previously thought. Second, when the vacuum system was switched on to replicate the breathing effect, the leakage worsened — a previously unsuspected aspect of pulmonary edema.

“The reality is that animals will be required for clinical testing for many years to come, but this moves us a step closer to finding alternatives,” said study co-author and Wyss staff scientist Geraldine Hamilton.

As yet the lung chip can’t yet replicate the precise environment of the human body — especially the endocrine system’s many hormonal secretions. But its ability to mimic certain conditions is encouraging to the Wyss Institute’s efforts to develop a full array of organ-mimicking chips. So far it has placed a gut, a heart, and a kidney on chips. The ultimate goal is to link up the various organ chips to create a body-on-a-chip.

As a Wyss Institute fellow Huh is currently focusing on the development of novel bioinspired/biomimetic microsystems that can reproduce the integrated structure and function of human organs. The study on the lung chip, published in Wednesday in Science Translational Medicine, is the first definitive demonstration that the organ-mimicking chips can be used to model the effects of disease and as a test bed for drug candidates.

He has published over 20 papers in Nature, Nature Materials, PNAS, and other research journals. He has also won the Distinguished Achievement Award from Michigan, Widmer Best Poster Award from microTAS, the Horace H. Rackham Fellowship and other awards. 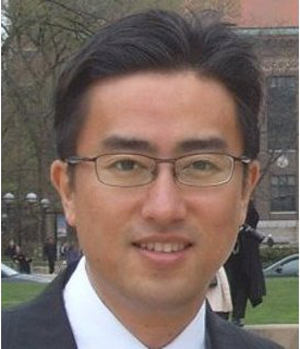 Dan Dongeun Huh has developed a lung chip that can mimic the distress response of the human lung to certain diseases.