UC San Diego researcher Tzyy-Ping Jung has created a portable brain control interface (BCI) that uses brain activity to dial a cell phone. The system can help the severely disabled function, power a highly hands-free interface, or serve as a portable monitoring system to detect drowsiness or loss of concentration.

Most brain-control systems are too cumbersome for real-world applications because they attach electroencephalogram (EEG) electrodes directly to scalp that has been smeared with conductive gels. Jung’s system uses a dry EEG headband linked to a compact Bluetooth module that wirelessly sends signals to a Nokia N97 cell phone programmed with signal processing algorithms.

Brain dialing is achieved using a novel visual feedback system. A large computer screen displays a keypad with each number flashing at a slightly different frequency. The “1” flashes at nine hertz, the “2” at 9.25 hertz, and so on. When a participant focuses on a particular number, its rate of oscillation is detected in the brain’s midline occipital. The EEG registers the brain activity and transmits signals to the mobile phone to be translated into the number being dialed.

“From our experience, anyone can do it,” said Jung. “Some people have a higher accuracy than others.” Jung can attain an 85 percent accuracy. Seven of the 10 subjects participating in his group’s study achieved 100 percent accuracy in inputting a 10-digit phone number, according to the report Jung published in the Journal of Neural Engineering.

The most obvious application of Jung’s system is helping severely disabled people communicate and function. But Jung is more excited about the technology’s potential to liberate the general population from using hands to hold and manipulate control devices. Jung considers the most challenging aspect of developing his system to be achieving a degree of portability that allows brain activity to be monitored and decoded in real-world settings.

“Monitoring the EEG of individuals performing their routine work in natural positions and movement within a real-world environment poses a severe measurement challenge using current laboratory-oriented technology,” says Jung. “To enable high-quality neurophysiological monitoring of naturally moving people, bio-sensors and acquisition circuits must be small and lightweight, battery powered, non-tethered and not require special skin preparation. Our study shows it is feasible to use a ubiquitous cell phone as a data logger and on-line processor for a BCI, which will open up numerous applications of BCI in real-world environments.”

Tzyy-Ping Jung led the project in his capacity as associate director of research at the Swartz Center for Computational Neuroscience at UC San Diego’s Institute for Neural Computation (INC), a post he has held since July 2001. In recent years Jung’s group has been working on several military projects for the U.S. Army and DARPA, among other entities. Since February of 2008 Jung is also a professor in the computer science department of National Chiao Tung University in Hsinchu, Taiwan.

Jung first became interested in BCI in 1993 after completing his PhD in electrical engineering at Ohio State University. His first project in that field was developing signal-processing and machine-learning methods for EEG analysis and interpretation.

“In essence, we were developing a mental gauge to continuously monitor the alertness level of the human operators,” he recalls of his first steps in BCI. “As I argued in my paper published in Proceedings of the IEEE, while most BCI systems to date have used invasive or implantable devices for patients with inoperative or malfunctioning external body parts or internal organs, a much larger population of ‘healthy’ people who suffer episodic or progressive cognitive impairments in daily life can benefit from non-invasive BCI. For example, reduced alertness, lack of attention, or poor decision making during monotonous, routine tasks can have catastrophic consequences.”

Tzyy-Ping Jung was born in Taiwan in 1962. He grew up in Hsinchu, a city known for its IT and semiconductor industries. The family home is less than 4 miles from Taiwan’s famous Science and Industry Park. In 1984 Jung received a BS in electronics engineering from National Chiao Tung University in Hsinchu. He received a masters in electrical engineering from Ohio State University in 1989, and a PhD in 1993. He completed his post-doctoral work in computational neurobiology at the National Academy of Sciences in 1995. Jung devotes his spare time to building rubber-powered indoor aircraft and playing tennis, a sport he has enjoyed for 30 years. 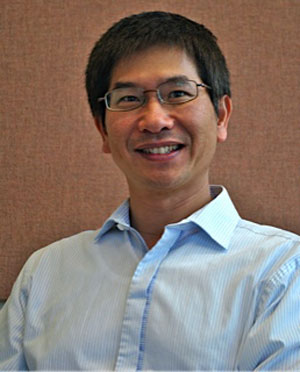