Vietnamese American attorney Viet D. Dinh may be the last line of defense between James Murdoch, heir apparent to Rupert Murdoch’s News Corp, and a prison term coupled with loss of control of the family’s global media empire.

Dinh is the “independent director” leading News Corp’s “outside counsel” probe into the role that the Murdoch scion — and possibly even his father Rupert — played in News Corp journalists’ use of wiretaps and hacking for scoops.

James Murdoch, 38, is under suspicion of having perjured himself in testimony before the British parliament after the release of a statement in July by a former editor of the defunct News of the World and a News Corp executive. The statement asserted that Murdoch had been privy to an email containing the full transcript of 35 hacked phone messages between the head of the Professional Footballers Association and its legal counsel, directly contradicting his earlier testimony that he lacked any knowledge of the hacking.

The likelihood that James Murdoch may have lied has also opened up dad Rupert, 80, to the suspicion of having been privy to News Corp journalists’ practice of using wiretaps and hacking to get scoops and that he may have participated in efforts to cover up the practice. If both or either Murdoch is found to have been involved in the wiretap and hacking scandal, shareholders and the U.S. Justice Department could sue to force them out of News Corp and to compensate shareholders for the loss of share value caused by the scandal. Because News Corp is a U.S.-headquartered multinational and Rupert and James are U.S. citizens, the fate of the Murdoch empire ultimately hangs on U.S. law enforcement and regulatory authorities. Already the scandal has forced the Murdochs to suspend plans to buy the remaining 61 percent of the BSkyB satellite TV network that News Corp doesn’t already own.

Dinh has, in effect, been entrusted with heading up the effort to insulate both News Corp and the Murdochs from the hacking scandal that caused News of the World — recently Britain’s leading tabloid — to be shuttered in July. That’s a surprisingly big assignment for a 43-year-old lawyer who fled Vietnam at the age of 10 and still speaks English with the Vietnamese tendency to gulp random vowels. But it makes perfect sense in light of Dinh’s dramatic ascent to the pinnacle of Washington D.C.‘s conservative legal establishment, coupled with his longstanding ties to the Murdoch family.

The legal and political spotlight started hitting Viet Dinh after he crafted the USA PATRIOT Act as George Bush’s Assistant Attorney General for Legal Policy during a two-year term beginning in April 2001. The Act’s name is actually a clever acronym (“Uniting and Strengthening America by Providing Appropriate Tools Required to Intercept and Obstruct Terrorism”) which reveals Dinh’s image-control virtuosity.

The Act itself is a radical departure from legal precedents protecting individual privacy rights against government police powers. It essentially gives Feds carte blanche to intercept the communications of virtually anyone merely suspected of links to terrorist activity. It authorizes the indefinite detention of immigrants and searches of homes, offices and records without warrants or even the knowledge of affected persons. Only in the wake of a horrific event like the September 11, 2001 terrorist attack could Dinh’s USA PATRIOT Act have been passed. Dinh managed to assemble it so quickly that it was enacted by an overwhelming majority of the House and a nearly unanimous Senate on October 26, 2001, a mere 45 days after the attack.

As the country gradually recovered its equilibrium, legal scholars began questioning the Act, and courts have struck down various provisions as being unconstitutional. The law was to have expired at the end of 2005 but the Bush Administration managed to pass a reauthorization bill through Congress in 2006 that keeps intact most of the original Act. In May of 2011 the Obama Administration signed a four-year extension of three key provisions. The Act made Viet Dinh a minor monster among liberals and a forceful thought-leader and folk hero within the conservative establishment.

Dinh has used his newfound stature — as well as his academic credentials as a constitutional law and corporations professor at Georgetown Law Center — to set himself up in practice advising corporate boards. His focus on image is apparent in the fact that the firm he founded doesn’t even bear his surname. It’s called Bancroft PLLC (Professional Limited Liability Corporation) because, as he recently told a reporter, Dinh, Bartolomucci & Clement is “not Anglo enough.” Bancroft is the name of a street Dinh used to live near in Washington’s exclusive Kalorama neighborhood. It is also the name of an old-line California legal publisher (Bancroft-Whitney) with which most lawyers become familiar in law school.

Bancroft’s reputation as Washington’s leading conservative appellate firm is bolstered by its representation of causes like the Defense of Marriage Act of 1996 and the Arizona Immigration Act of 2010, both of which are under attack from the Obama administration as well as various state and federal courts. It had also joined Kenneth Starr in a 2006 challenge to the Sarbanes-Oxley Act which expands the liability of corporate directors for the consequences of their failure to disclose material information.

Dinh’s mission on behalf of News Corp and the Murdoch family brings together the stature he has acquired with the law-enforcement community as architect of the USA PATRIOT Act and his experience guiding major corporations through the shoals of government regulations and public perception. He will supervise an internal probe into any illegal activities by the News of the World and of any involvement by News Corp executives. He will imbue the probe with a semblance of objectivity so its findings can support some resolution of the scandal that won’t involve prison time for a Murdoch or the ouster of a Murdoch from management. With the gravitas Dinh enjoys in the Washington establishment, he has as good a chance as anyone to secure the benefit of the doubt for the Murdochs. It’s precisely the kind of quasi-legal, quasi-public relations work Dinh has been doing for other Bancroft clients.

That Dinh is serving as News Corp’s top independent board member is surprising when one considers his deep ties to the Murdoch clan which controls a majority of the firm’s Class B voting shares, with Rupert Murdoch alone controlling 40%.

Dinh has been a friend of Rupert Murdoch’s oldest son Lachlan since they met at the Aspen Institute on journalism and homeland security in June of 2003. They became close enough friends for Dinh to become godfather to Lachlan’s second child. Through Lachlan Dinh has also met Rupert Murdoch. But Dinh’s ties to News Corp go back even further. In 1992 Dinh had written an op-ed piece for the New York Times about a sister — the last of his family of nine to leave Vietnam — who had been trapped in a Hong Kong refugee camp for boat people for three years. The South China Morning Post, owned by News Corp, helped get her released by publishing a series of articles.

Viet Dinh was born February 22, 1968. In 1975, after the fall of Saigon, his father was imprisoned in a re-education camp as a political prisoner. He escaped in 1978, and was a fugitive in Vietnam when Viet, his mother and four older siblings fled in a 15-foot fishing boat with 85 others. After 12 days without food or water they encountered a Thai fishing crew who helped them reach Malaysia.

A Malaysian patrol boat fired on them to discourage them from landing. They were able to dock but it was clear the Malaysians would force them to shove off the next morning. Dinh’s mother snuck back out to the boat alone that night and damaged it with an axe to avoid being sent back. The family spent six months in a Malaysian refugee camp before being able to immigrate to Oregon in November of 1978.

They picked strawberries as migrant workers and sent money back to Dinh’s father and a sibling hiding out in Vietnam. The eruption of Mount St. Helens in 1980 damaged the crop and forced the Dinh family to move to Fullerton. Even Viet worked in a sewing factory after school. In high school Viet improved his English by joining the speech and debate team. 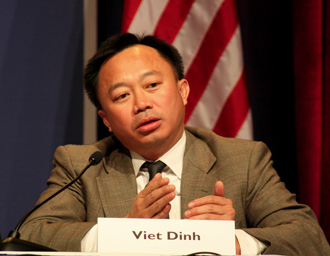